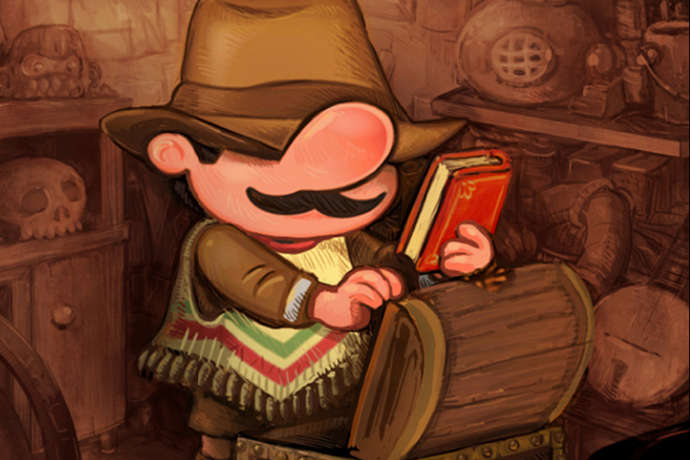 How to design a game turns out to be a complicated topic, not least because search engines rarely show results about how to design non-video games. But I found a few great sites, games, and people to explore.

These days, with GameApp, Codea, and a few other software applications designed to make it easy to create a video game, any human with a bright idea, two hands, at least one eye, and a brain can create a game and make bazillions. Except that’s not reality, is it?

When I wrote this issue of the magazine, a funny thing happened. I thought it would be easy to research how to design and create games, not only video games but any game. Turns out internet search engines are deeply biased towards video game creation. Type in the search phrase, “how to design a game” and you get pages of video game-specific information. If you’re a teacher with 25 students and want to learn how to create a simple game, maybe to teach part of a lesson, you need more than a shovel and the internet. You need help.

The questions I want to answer this month: How DO you design a game, not only video games? And how complicated is it, really, to design a video game? With my trusty DuckDuckGo search engine ready, here we go.

How to Design a Game

On DuckDuckGo, one of the top results is rather amusing: How to design a game for sociopathic characters? Of course, by game they mean video game. The link goes to an excellent answer on the Role Playing Games area of StackExchange. The question amuses me because no one ever seems to want to create a game with normal people, or post question about how to do that. Sims games are at one end of the normal people spectrum (you can make your characters do bad things) and games like Harvest Moon are maybe at the other end.

More scary is the answer to the question, how to design a game for sociopathic characters? I’ll quote part of the answer:

Also, I will caution against “misery tourism.” I found long-term evil campaigns work best when players are working from plausible motivations coupled with a “the ends justify the means” attitude. That helps get away from the icky factor, yet produces as much or more mayhem as deliberately trying to be “evil.”

Anyone who reads history deeply will recognize this logic. It’s the logic dictators and elites use to justify endless war and torture. Scare the populace to provide plausible motivations then present them with ends justify the means options to make the scary stuff go away. Apparently this dynamic works in video games, as well, to get human beings to do profoundly immoral and often illegal things. Anything goes tends to backfire as policy in the real world. It would be interesting to know if some of these games provide context, creating self-destructive chaos the more you go down that path.

In any event, WikiHow has a more simplistic and cheerful answer to the question, how to design a game. Any tutorial with a cheap illustration of a crooked wizard hat on a blue background is worth a deep read. Seriously, though, they break the game design process into these 7 steps, in this order, each with their own steps:

As a writer, I can tell you these steps are out of order. You create your characters first, with a bias towards characters whose needs and interests conflict sharply with other characters. The personalities, needs, and ambitions of your characters as they interact then help create the story. Smash your characters into each other early and often. Once you have great characters with a great story, then it would be worth doing the other steps. With the WikiHow process, you could get to step 6, Designing your characters, only to find you have to rip up steps 1-5.

But I quibble, maybe. I do like the “Going pro” headline, shades of going rogue (modern) and Popular Mechanics (classic).

So I went back to the sociopathic question at StackExchange, to read the original question, and discovered a geek joke: the first response was, “I asked Dexter Morgan but he said he was in the middle of something.” Google Dexter Morgan, if you don’t know, and you’ll find he is a serial killer with a TV show. More precisely he’s the star of a TV show about a serial killer.

Anyway, we’re no closer to understanding how to design non-video games.

I scrolled down the DuckDuckGo results for “how to design a game” and found more promising links. For example, an analysis of the board game Carcassonne which describes how to play the game, as well strengths and weaknesses of the gameplay. And another WikiHow tutorial, this one about how to create a board game. And a search result summary that says, “People in Love is a game about building cities where people can fall in love. Cities that are not inhabited highways, nor tools for economical and racial segregation.”

Since I love punishment, I clicked through to the WikiHow tutorial and was instantly rewarded by the first sentence, straight out of the 1950s: Want to impress everyone on your next game night? I sympathize, however, because writing intros to articles can be difficult. Some days you punt and write a series of trite questions like the WikiHow tutorial.

The tutorial has three steps, not 7, to create a board game:

Perhaps the most interesting step is the first. However, it begins with another obvious statement: Write down your ideas. The fourth step in step one is, Decide how players will win, followed by, Write out the rules. These actually are interesting points.

How to Design a Video Game?

When I clicked through I found a game design in progress. It appears to be the creation of two Italians. Since I like to highlight people and work outside the US (otherwise you might think only Americans create technology), I should mention the game here. The People in Love game appears to be a reverse Sims game. The people in the game decide what they like or don’t like, in this case, depressing architecture or other city planning features. The game lets you send activists to an area to organize against bad urban planning. The site includes a blog with some details about how the game is being created, as well as news about other games and how they are designed.

Which led to an article titled, Learning to design a learning game (how Tonzilla was born). The piece has some interesting details, different ways to think about games and how to create them. Our primal expression instrument is our voice, according to the game designer, and that led to the game he is creating.

Both of these articles highlight a key part of designing a game, indeed, designing anything: passion. We’re trained by advertising and the news media to believe video games are mostly role playing shooter games. In reality, video games can (and often are) about many other things, most of them non-violent. And these games, by being so different, can engage people and create the opportunity to grow and change. The world is bigger than violence, in other words.

The Tonzilla and People in Love games also highlight the fatal weaknesses of the glib WikiHow approach to game design. These two games begin with ideas and characters, not a checklist.

Then again, clicking through the Tonzilla site to their Twitter feed, for Stefano Cecere, led me to the Twitter page for “Pablo Cavarez: Sliding Puzzle Explorer, a sweet iOS/Android/WP8 game by BloodyMonkey”. So many things to like, starting with the graphics at the top of their Twitter page to the scary company name, BloodyMonkey. Their feed also includes some details about the game design process. Here’s the short game video to demo the Pablo Cavarez game:

i love Blender.. but for my needs and time, @ProBuilder3D is my new modeling heaven right inside the @unity3d editor!

I’ll have to remember to look up ProBuilder3D. But I digress, even more than usual.

So I went back to my DuckDuckGo search results page and scrolled even deeper and found something truly amazing, or at least interesting. I found a three-part series by Brenda Romero, a game designer going back to 1981. Instead of checklists, her articles describe practical stuff like design documents, the essence of different types of games, and how to structure menus. Plus she has developed non-video games and worked with a number of game companies and other game designers.

Even more interesting, and the first and probably only time I’ll link to a TED Talk (because they’re mostly social signifiers like buying a Mercedes and, for my taste, rarely useful), she did a presentation about how she created a game based on a difficult topic her daughter asked her about one day, slavery:

Having designed web interfaces, her article title All Menus Must Die also got my attention. So true. Her blog is worth clicking around. Perhaps even more fun, digging out Brenda Romero’s Twitter feed led to John Romero, another long time highly skilled game designer and coder. While Mr has more Twitter followers (41k+ to 38k+) Mrs has the better Twitter handle (br). Two letter Twitter handles must be rare.

Perhaps I should stop here. Hopefully you learned something about game design with at least a few links to follow up on.

How to Design a Game for Sociopathic Characters?

How to Design a Video Game

How to Make Your Own Board Game

Analysis of the board game Carcassonne

Learning to Design a Learning Game (how Tonzilla was born)

Also In The October 2014 Issue

A 4,000 year old Chinese magic squares puzzle is both fun and a way to learn basic problem solving skills. Plus turtles.

Can you name the first video game? The first game likely was Tennis for Two in 1958 but it could be Space Wars! in 1962 or other games. It's complicated.

The story of an English-speaking person learning a little Japanese by playing the latest Harvest Moon game, Connect to a New World, in original Japanese.

Wendy Norman, the Director of Social Good at Microsoft, talks about the history and features of the Skype in the classroom service for teachers.

You can use the concepts of game play to turn almost any task or information into a game. Assuming you can define game play.

The Greatest Show and Tell on Earth turned out to be tons of fun for kids and parents, plus a place to wander and find new technology. Links and video.

Links from the bottom of all the October 2014 articles, collected in one place for you to print, share, or bookmark.

Interesting stories about computer science, software programming, and technology for the month of September 2014.

Three game creation software tools you can use to create games. Includes a brief description and lots of links to these and other game creation tools.