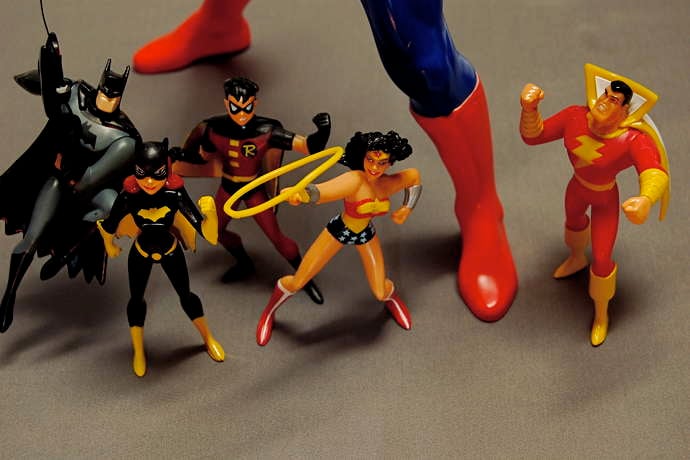 Playing with our kids gave me license to buy a few extra toys for myself. My desk, for example, has numerous owls as well as small planes and automobiles. No boats or trains. My desk also serves as a home for the toys our kids don’t want to lose. There’s Monk-Monk, the first toy my son got from a claw machine, and a cute too skinny bunny from a long forgotten Easter.

In writing this issue of the magazine, about little kids and what works for them in the way of toys, computer games, programming languages, and computer science, I realized maybe toys are for all ages. Perhaps toys serve a purpose. Toys might be a way to escape The Man or distract your hands while on a boring work call. They also bond adults with kids. And they can disrupt how you think about the adult world, by their mere irrational existence.

The questions I want to answer this month: Where do toys come from? Are toys only for kids? What useful purpose do toys serve? You might think of this article as a short history of toys.

Where do toys come from?

I started with the search phrase history of toys at both Google and DuckDuckGo search engines. While both gave me the Wikipedia article about toys, DuckDuckGo had a more interesting result near the top, the history of traditional handcrafted Mexican toys. They also link to articles about paper toys (“date back to ancient times”) and Kondapally toys from India.

Clicking through to read the article about paper toys made me slap my head. Of course, it includes Origami. Didn’t even think of it when thinking of toys.

Years ago I taught my kids how to make a few Origami animals only to have my son figure out how to create a ninja star which amazed and amused his school friends. Insert here something about idealistic dopey parents trying to engage their children with wholesome play only to have them use the techniques to create something crass…

Paper toys also include paper airplanes, paper buildings, basically any shape you might create. Some paper toys include lines and colors that fold together to create a building or car or other objects. Presumably Mesapotamian kids in 3000 BCE didn’t make paper airplanes but you never know. Surely some kid discovered paper folded into certain shapes will float through the air when thrown?

The Wikipedia article on paper toys explains paper toys date back to Origami, which is Japanese for Ori (to fold) and Kami (paper). Except Origami came from China then spread to Japan. Only rich ancient people in China then Japan could afford paper, however. But they also folded paper around food and objects.

Of course, the Wikipedia topic on Origami tells a slightly different timeline. That article says it started in Japan in the 1600s AD (ACE). And that paper folding existed in China, Germany, Italy, and Spain, among other places. They also mention the principles of origami, a paper toy, are also used in medical stents, packaging, and other engineering structures (possible translation: building).

Kondapalli toys are chiseled from light softwood then painted with vegetable dyes and vibrant enamel colors. Toys include palm trees, bullock carts, elephants, and village backdrops. Most interesting, Kondapalli toys are created by a community of toy makers who teach their kids how to create these toys. It’s a 400 year old community tradition.

However, I didn’t find the fun stuff about the history of toys until I found a link to LocalHistories.org. They claim kids before the 20th century had few toys, or time to play. Ancient Egyptian kids played games similar to what kids play today, with dolls, wooden animals, marbles, balls, and spinning tops.

The LocalHistories.org site also claims the first doll house was made in Germany in 1558. And in 1693 John Locke, an English philosopher, argued kids could learn the alphabet by playing with dice that had letters on them. Presumably they also could learn how to play dice and gamble.

Of course, the Wikipedia article on toys begins in a boring rather than playful way: “A toy is an item that can be used for play.” Gee, good to know. They then claim toys date back to the prehistoric (perhaps dinosaur?) era and the word toy was first used in the 14th century.

Are toys only for kids?

This question makes think of the Trix cereal ad where the rabbit is told, “Silly rabbit, Trix are for kids.” In this case, the answer might be, “Silly adult, toys are for kids.”

However, as any parent knows, some toys bought for their kids turn out to be fun for their parents. Parents who pay attention to the age of their kid and what interests them can find toys to share. Building a really neat LEGO building or vehicle can be a great way to pass time and bond with your kid.

Same for playing Mario Kart even when the parent always loses. I amuse my son by losing points when we race nine other people over the internet. Losing points in Mario Kart apparently is very hard to do. But I’m a special snowflake.

And, of course, there are adult toys like shiny red Corvette car or motorcycle but that’s outside the scope of this essay.

What useful purpose do toys serve?

The Wikipedia article on toys says toys are mostly played with by children and pets. While the attraction of toys for pets is obvious, for human kids toys help them learn about the world around them, discover their interests, learn cause and effect, and practice skills.

I’d also argue toys are a way for kids to connect with other people, from kids to parents to other adults in their lives. Adults often welcome a distraction.

It’s also likely toys are subversive in a regimented world with jobs, calendars, and social norms. Playing a video or other game takes you out of your daily world for a brief amount of time. Like a great painting or piece of music, toys are portkeys to let you travel to a different place, even if you never leave home. Unlike the portkeys in Harry Potter, however, toys are not smelly old boots.

So the next time you see a great toy for yourself, or your kid, buy it or make it.

A History of Toys

Also In The September 2014 Issue

The best toy is one that is fun for your child and meets their needs. This article helps with ideas how to choose toys and where to find them.

People use the Scratch language to create interactive stories, games, and animations. Includes an active community to share projects.

Learning how to draw is a great way to learn how to pay attention to detail, and learn what to leave out.

Databases are mysterious but critical technology. Here's one simple way to describe them to kids (and adults).

Luis Carbajosa is a Civil Engineer in Spain who, with his wife, are raising five boys who love technology.

Contrary to what you might think, the Python programming language is not too complicated for kids to learn and use effectively.

Find kid-friendly projects online to keep you and your kids busy having fun and learning.

Links from the bottom of all the September 2014 articles, collected in one place for you to print, share, or bookmark.

Interesting stories about computer science, software programming, and technology for the month of August 2014.